On Thursday 5th November was the launch of the most highly coveted designer collaborations with H&M to date. With model of the moment Kendall Jenner, BFF Gigi Hadid and stunner Jourdan Dunn taking the world by storm with their flawless images on the campaign ads, everyone and their dog knew #HMBalmaination was going to be a sure winner, but I guess no one anticipated how much chaos would unfurl at the day of launch. 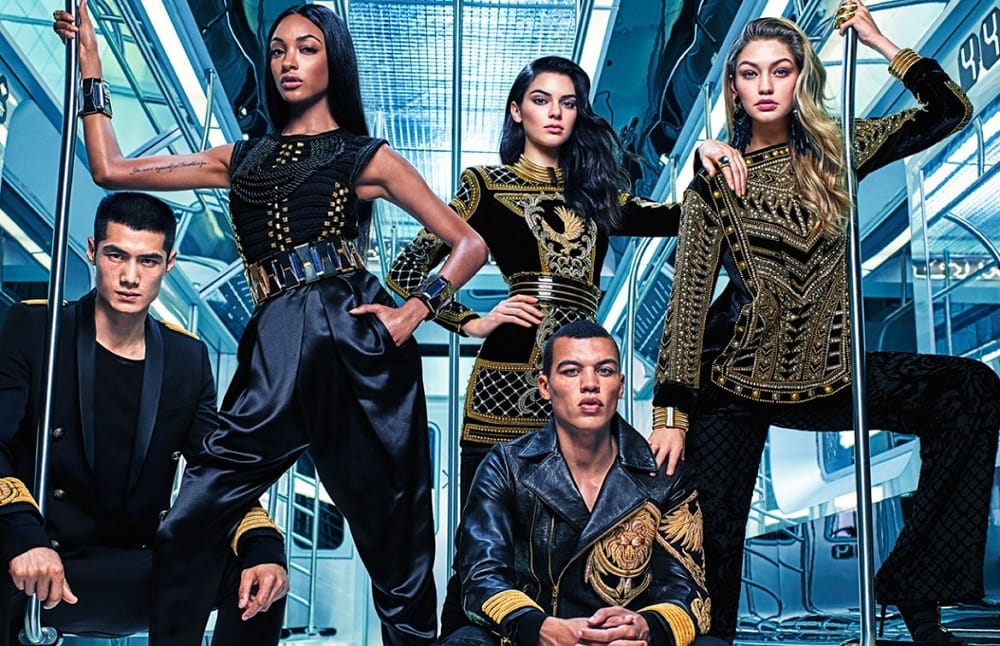 My friend and I, having queued last year for the Alexander Wang collab knew we had to get to get in the queues early. Aware of the hype #HMBalmaination had had the last few months, it was a given that we had to go even earlier so we started queueing from 7am.

Whilst this may seem early, I heard that some people had been queueing since 9pm the night before – which is some proper commitment but nonetheless we were equally as dedicated to the cause!

Having read up ahead online we were told that online sales and doors to stores would open at 9am. With only 4 H&M stores in London carrying the collection, we opted for the flagship store on Regent St thinking it would have more stock but oh my God, what a mistake that was. 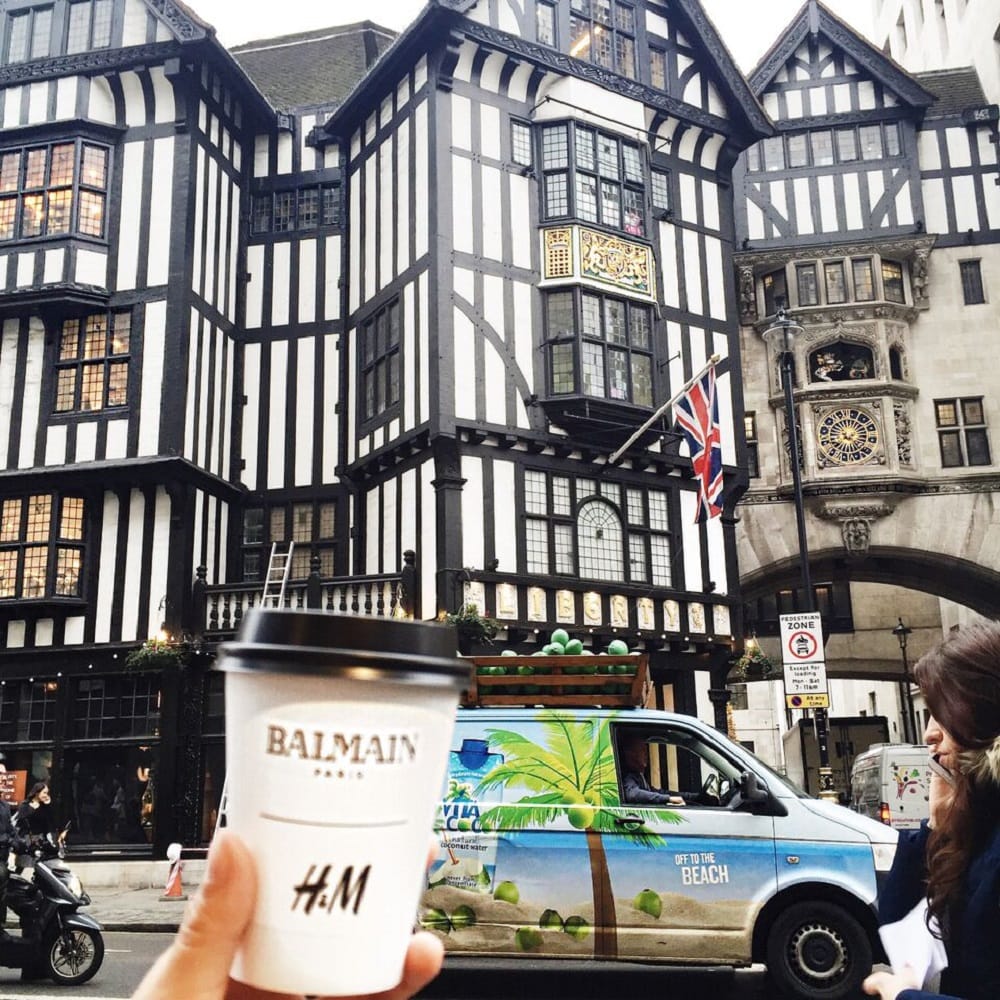 It started off ok, people were civilised, having chats with strangers and it was all pretty light hearted! We even got some complimentary hot chocolate and macraroons which we realise now was all a ploy to sweeten us up before the real madness started.

As it drew closer and closer to 9am, not only did the queue barely move, we also noticed we still didn’t have wrist bands either which was the golden ticket into getting into store – not to mention we would know that we were closer to our end goal.

As 9am came and went we were being told next to nothing about what was actually happening other than some scuffles had broken out at the front of the queue, people were getting irate and police had to be called which is not what any of us were expecting. Soon it was 10, 11 then 12 and whilst we finally made it round the corner from Liberty’s, we came to a standstill but the entrance was within sight so we decided to keep waiting, I mean after all, it had already been 5 hours by this point! 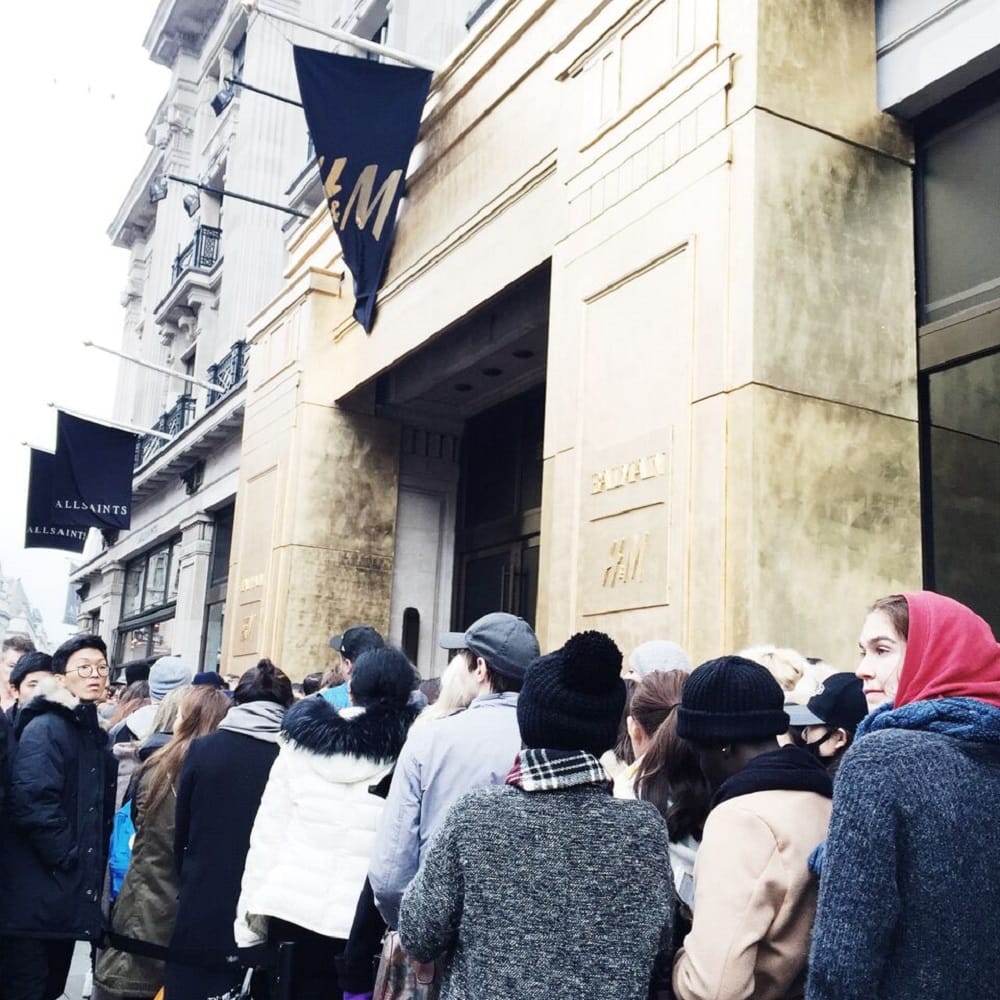 The front of the queue at around 11

There were some who had managed to get into the store but then proceeded to circle themselves around our queue, flaunting their wares. Not to mention you had some people really taking the biscuit when they tried to sell items they had just bought for £150 for £500 to queuers!!!!

There were mixed messages being passed down the queue. Some were saying that people’s time slots were not being monitored so had well over the 15 minute window which would explain why there were chants of “Out, Out, Out!” every so often. Others were saying no women had been allowed in so given this information we assumed there would be stock. We also heard that they had been letting people in but were restocking after every group and we were told that we would be getting wrist bands within 15 mins. Those 15 mins turned into yet another hour before we were finally told by the emotionless staff, that the stock was sold out, the police had closed the store for the rest of the day and no one else was going to be allowed in.

So that was it. After 6 hours we were just told to move on. No proper explanation as to, why it was so poorly organised, where the hell the wrist bands were, why if there were people causing trouble could they not have been removed?! Also how did it all sell out if so few people were let in in the first place?

Come on H&M, this isn’t the first time you’ve had a designer collaboration. Ok, I understand you may not have anticipated the intensity of the shoppers but where in the hell was the order? Where were the staff? Why couldn’t you update people sooner rather than just at the end when people thought the finish line was within reach.

All in all the whole day was a shambles, managed (rather NOT managed) by poorly informed staff, who lack organisational skills and were not experienced enough to handle the demand.

Not only did I waste a whole morning I also came away with nothing, so thanks H&M for raising my hopes only to dash them in one cold, tiring and frustrating blow.

Did anyone else queue for the #HMBalmaination aka #HMabomination (lol)? Did you manage to buy anything?