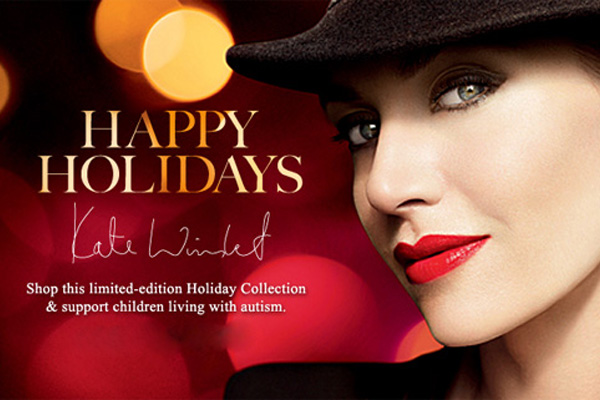 Lancôme and Kate Winslet for Autism

I was just browsing the internet today and came across a little article about Kate Winslet for Autism and learned that she has established a charity, The Golden Hat Foundation for those who are affected by Autism. I have always admired Kate Winslet’s acting ever since she played the leading lady in Titanic. I love how she has kept true to herself even when having reached international stardom, which is why I’m so inspired by The Golden Hat Foundation!

It’s admiral to see that Kate is raising more awareness about Autism through The Golden Hat Foundation and is actively involved in supporting people who are affected by Autism. Education is the key to helping people to communicate effectively, which the charity can successful achieve through job training and various other activities.

Recently Kate Winslet has also teamed up with Lancôme to create a new make up collection which is available in stores now! These limited edition pieces feature a beautiful lipstick which is available in a variety of different shades and a lovely selection of nail polishes to choose from. There’s also a gorgeous Blush Compact which is my personal favourite as it has the “Golden Hat” embossed on the blush. All of the products feature the Hat and also Kate Winslet’s signature in gold, on Lancôme’s chic, glossy black packaging and with their signature ‘Rose’.

Lancôme has also pledged to donate 150,000 Euros to the Golden Hat Foundation from their sales. I love how Lancôme give generously to the charities they support, such as ‘Genes Day’.

All in all I think what Kate Winslet is doing is truly inspirational and a really great role model. Let’s just hope more celebrities follow in her footsteps! ♥